Some good T-shirts and things, with 80s video-games themes.

I first saw it on my friend Mars’s blog, and later this youtube version was on digg.

Found this on digg. It has to be the best pacman strategy guide I’ve seen yet. It doesn’t just tell you what to do, but why; and also gives you checkpoints and hints on what you should be seeing, and how to tell if you’ve gotten offtrack or your timing is off. It’s designed to allow for your own personal timing idiosyncrasies, and teach you how to discover/improve patterns of your own.

So, Sonic the Hedgehog turned 15 years old on June 23rd. Although, he’s actually been 15-years-old since he was born (which makes this date especially important).

At any rate, Digg gave a very cool site, with a printable PDF that will allow you to make your own three-dimensional version of Sonic’s Green Hill Zone. Enjoy! 🙂 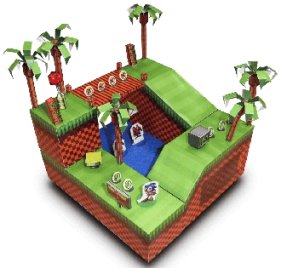 About a month ago, I impulse-bought the Flashback system (can’t find the website, but here’s the Flashback on Amazon), which plays NES/Famicom carts. Comes with two controllers with A and B buttons, shoulder-button equivalents, and turbo button versions. Supports PAL and NTSC video outputs, and uses RCA-style output cables.

When I bought it, I didn’t have any NES carts, so I didn’t even bother opening it. Yesterday Kirby arrived thanks to eBay, so here’s a shot of my system:

I had no idea the thing was so friggin’ small… it’s actually kinda cute. Except when there’s a cartridge in it.The system is, like, half the size of the NES carts you plug into it! (Not volumetrically, but from a 2D visual standpoint.

The one thing I wish it had is a power LED, so you know when it’s powered on.

Did you ever own an Intellivision video game system?

After our Atari 2600 got stolen out of our home, along with a guitar and camera, my uncle Gary bought our family an Intellivision, along with scads of games. That console makes up my earliest childhood memories of videogame-playing (I barely remember anything at all about the 2600; just a dim memory of playing Basketball with my dad).

Nightstalker was cool enough, and my best friend Laban (still is) and I spent hours discovering neat tricks in Utopia, like how to turn your PT boat invisible or make it travel on land, or sink a harbored fishing boat. But far and away, my most favorite game was Tron® Deadly Discs.

I used to love Out of this World (aka Another World) when I was a young teen. It’s probably the first vector-graphics action-adventure game ever made. Smooth animations, for its time.

Turns out, they’re releasing a high-res remake this weekend. Woohoo! While the background graphics have been significantly enhanced, it doesn’t look like they’ve changed the character graphics one iota.

This month looks to be a great month for adventure gamers in general, what with Dreamfall (sequel to The Longest Journey) and Ubisoft’s Paradise coming out.

Update 4/16/2006: I’ve downloaded the game, which is available directly from their website, in the form of an unlockable demo. The background graphics are indeed greatly improved; however, many of the characters and animations are essentially untouched. To me, the juxtaposition of simple, basic sprites/animations on more realistic, detailed backgrounds is a tad unsettling. Nonetheless, it’s fun to play, and it does look better than the original.

You get to play through that first beast-chase scene, at which point the game ends and you have to buy the codes to unlock the full version. In my opinion, that’s way too short; although it actually probably provides a good idea of what the game is like for people who’ve never played it before (those fanged worms might be easy to me now, and the beast easy to avoid; but that was hardly the case the first few times I played it).

If you’ve played the addictive PS2 game Katamari Damacy, this video is frikkin’ hilarious. If you’ve never played it, you won’t get it.

Well. Not exactly the most glorious of first posts… but I wanted to put this down somewhere before I forget it.

There are too many bad games. The fact is, most games suck. It’s the greatest danger to the future of this business. There’s a real danger of an Atari 2600 episode here, given the oversupply of poor quality content, followed by consumers abandoning the platform.

I found this quote through slashdot -> Next Generation.

I posted it here because it really follows what I’ve been thinking for a while now: and that is that decent-quality games are becoming more and more rare. I think, given the context of the article, Mr Lasky is speaking specifically of mobile gaming; but I feel that the same could be said of the current gaming industry in general. I’m waiting longer and longer for my next “fix”, and becoming more and more disappointed with the offerings.

Shadow of the Colossus (PS2) was, truly, a deep gust of fresh air. It sets in contrast the great many other games of the same year that are woefully lacking.