(Pictures in this post are sparse; my photo album in Facebook is shared publicly, so provided you have an account, you can see the full set of pictures there.)

I’ve been wanting to make a trip to Japan since I first started learning the language 25 years ago. I’ve never even left North America. I’ve barely traveled a little ways into Canada, and a little ways into Mexico, and the last time I did either of those was when I was 18.

The high school student that stayed with our family for a year, Kanako Maezato, was graduating high school (has now graduated, at the time I’m writing this), and had asked us to come see her. We both wanted to come, but Japanese schools end after February, and of course our three kids are still in school, so it would have been difficult for us both to come. My wife Sara doesn’t like to travel alone, so I ended up coming by myself. I’m spending a week in Okinawa, where our homestay student lives (her family is hosting me), and then most of a week in Tokyo, with a weekend diversion in Osaka.

I decided not to mess around, and chose to fly with JAL, which has a reputation for being an excellent airline (they certainly lived up to it as far as I’m concerned).

While waiting for the plane to take me to Tokyo (where I spent one night before proceeding to Okinawa), I saw the flight attendants pass through the boarding area to the jet walkway. Each and every one of them, before entering, would turn and bow to the patrons seated. Which, at the time, was mostly just me, and maybe a couple other people, which was highly amusing, and probably made me feel a bit the VIP. 🙂

Aboard the plane, service was beyond exceptional. As expected, everything with a smile, but something I didn’t expect was that, between meal and snack and drink times, they would still be trawling the aisles on a regular basis, quietly presenting various conveniences, such as blankets or earplugs or eyemasks or a small tray of snacks with a couple drinks, on the off chance anyone felt the need for such a thing. You don’t really ever have to hit the assistance button (not even sure there was one? Didn’t see it up by the lights, where I’ve usually seen them before on airplanes), because they’re always just there when you need them.

Also, the meals on the flight were amazing. A variety of things to eat, all of which were good.

At one point in the flight the next day to Okinawa, they served a few candies. One of them tasted like mint and brown sugar, so I asked the flight attendant if that’s what it was, and she took the time to explain that it was and that it was an Okinawan specialty, and did I want some more? I politely declined, but she came back a few moments later with a little packet she’d prepared for me, with a couple more of those candies, and a couple other varieties as well.

Backing up to my first night, in Tokyo. I’d decided to rent a mobile phone and wifi hotspot for the duration of my stay in Japan, so I went to the store at the airport where that’s available. It was ridiculously easy. I gave them my credit card and passport (for ID), and filled out, like, a few lines on an application. They then explained to me that I would not be charged on the card until I brought back the devices, at which time they would charge the card for the rental fee, and any minutes I’d used on the phone (no charge for minutes or bandwidth on the hotspot device).

What. How… what?! That would never happen in America. You’d definitely pay a hefty deposit in advance for the devices, and probably in advance for the minutes too (prepaid?). At the very, very least, you’d pay for the minutes as you use them. Granted, that’d kind of suck, since the bank will charge a currency conversion fee, but no American company would ever be so trusting in their arrangements. Especially without a credit check. I’m not even sure how that can work for them – what if someone gave them their credit card info, and then proceeded to max that card out during their stay, and screwed them over when they returned? Even contesting the charge seems like it’d make things pretty difficult for the rental company, given how hard it is to pursue legal action and such things against someone in another country. I was completely amazed.

The hotel I was staying at was the Grand Park Hotel Panex (booking.com). I took a bus from the airport, but missed the stop (I recognized when it was coming, but stupidly forgot to hit the “please stop” button). So I had to get off a stop or two later, and catch a taxi back. It was under $3, though, because I was still relatively close (tipping is not expected in Japan, and sometimes considered insulting, so I didn’t add it).

The hotel’s elevators were annoying… the doors close, literally about three or four seconds after opening them. I had two large bags, and there was no “rushing” through those doors. They closed on me and my bags about three or four times as I got them out (both that night, and the next morning). Odd.

Once I arrived at my room, I could not for the life of me figure out how to turn any of the lights on. There was a small glowing panel (looked like a button, but wasn’t pushable) next to a switch that appeared to be for the room’s main light, but hitting the switch didn’t do anything. Bathroom light wouldn’t turn on either. It was midnight, so this wasn’t fun for me. There was some writing under that glowing panel, but the panel’s light was too dim to make out what it said. 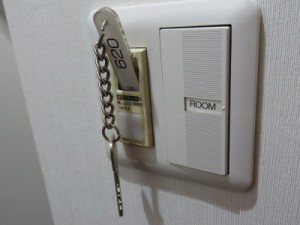 I found a (very convenient!) flashlight attached to the bedside, and brought that back to get a better look at the text. I figured out it was saying that I should insert the hotel keyfob (a long plastic stick thingy) into a slot in order to provide power to the room. If I couldn’t read Japanese at all, there would have been no possibility to avoid a call to the front desk to ask about the power (which would have been equally pointless, as the receptionist didn’t speak English anyway).

I really haven’t experienced any jet lag at all (this is my third day here). Probably because I made a point to attempt to adjust my sleeping patterns to the Japanese time zone a couple days before I left (having a flexible work schedule definitely has its advantages). I haven’t found that I sleep quite as long at night as I might want to—it gets cut shorter by an hour so—but nothing horrible, and I generally feel pretty wakeful up until 10 or so at night. 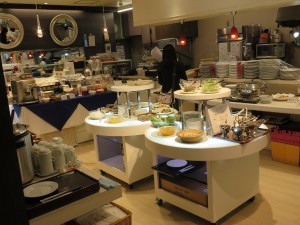 In the morning, after I checked out, I saw that there was an amazing breakfast spread set out. I didn’t see any prices on any of the items, so I figured it must be the most amazing complimentary hotel breakfast I’d ever heard of. Turned out I was wrong; it wasn’t priced individually, you had to buy a breakfast ticket at the reception.

In the morning, I needed to get back to Haneda airport, so I tried to take the train. I ended up going to the wrong train station, though, which took me a bit to figure out (I still had plenty of time). Once there, I got myself a Pasmo card, which I charged up with some money to use on the Tokyo train system (you can also use it at station vending machines, which is fairly cool).

At the rail station, there were gates to use your card at for entry. I saw a slot in the gate, so I stuck the card in. It was accepted oddly. I took a closer look and realized the slot was for paper tickets, and I was supposed to swipe the card over an RFID-type scanner. Whoops. Fortunately, at all the station gates there’s at least one attendant right by, so I got their attention and the gate machinery was opened and my undamaged card handed back (all within mere seconds). Really efficient. And embarrassing.

That’s about it for this post, except I’ll mention that, since there’s no tipping in Japan, and sales tax is always included in the listed price, figuring out totals at stores and restaurants is way easier than in the US. Especially since they mostly don’t follow the practice of pricing things at $4.99. Japanese vendors are not afraid to call 500 yen, 500 yen.